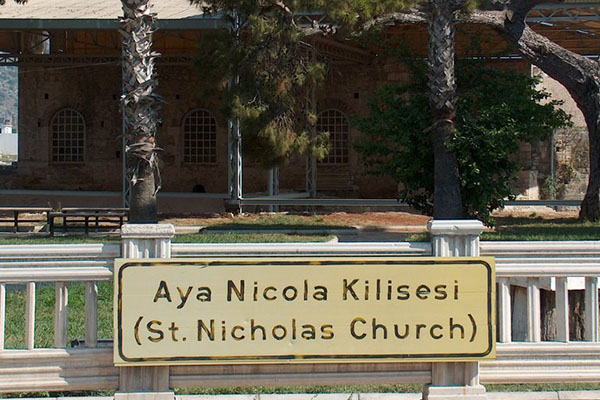 “The church of Santa Claus” is a church located in Demre that was built after the death of St. Nicholas. It is believed that the remains of St. Nicholas were interred here for a period before being taken to Bari by Italian sailors. 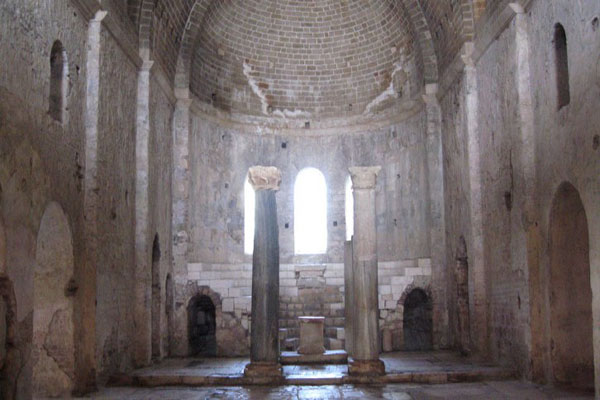 Don’t miss out on the church of Santa Claus when you visit Kaş!

The St. Nicholas Church was first built in the 6th century following the death of St. Nicholas. The church that exists today was built from the 8th century onwards; a monastery was included during the second half of the 11th century. In 1863, Tsar Alexander of Russia bought the building and the surrounding area from the Ottoman Empire and started conducting restoration projects, but later the Ottoman government took the area and the church back, giving the Russians permission only to restore the church. The restorations were done poorly and didn’t stay faithful to the original structure, and in 1876 the bell tower that can be seen today was included. In 1963 the east and west wings of the church were excavated. In 1967 the tomb of St. Nicholas, which had been damaged in 1087, was discovered.

When the church that was built after the death of St. Nicholas was destroyed in the earthquake of 529, a larger basilica was built in its stead. Peschlow has speculated that two small sections with twin apses and the larger portion of the northern side nave belong to the original building. 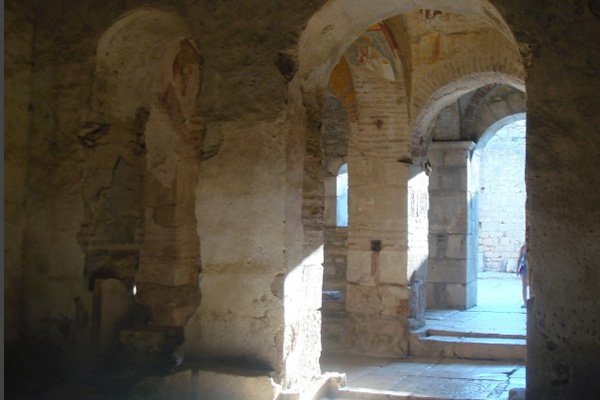 A Church That Bears the Marks of History

The church was destroyed in the 8th century either by an earthquake or during the Arab campaigns, and later rebuilt. In 1034 it was destroyed by naval attacks by the Arabic fleet. It is evident by the inscriptions of Byzantine emperor Constantine IX Monomachos that the church was repaired 1042 by himself and his wife Zoe after staying in a state of disrepair for ten years. In the 12th century the building was repaired again and several additions were made to the structure. From what we understand, the church was used freely for services and several repairs were made to it during the 13th century when Myra was under Turkish rule. In 1738 the chapel next to the larger church was repaired. C. Texier, who was journeying through Anatolia between 1833-1837, has stopped through Myra and written about the church in his books. About 10 years after him Colonel Spratt and Professor Forbes have also visited Myra, mapped out the blueprints of the church, and discovered that there is also a monastery next to the church. In 1853 during the Crimean War, Russians took notice of the church and bought the land in the name of Russian Countess Anna Golicia with the intention of founding a Russian colony on it. However when the Ottoman Empire realised the political aspect of the situation, they confiscated the lands back, and only accepted requests to renovate the church. In 1862 a French national named August Salzmann was tasked with the repair of the church. The restorations were done poorly and didn’t stay true to the original structure. During this restoration in 1876 the bell tower that can be seen today was included. 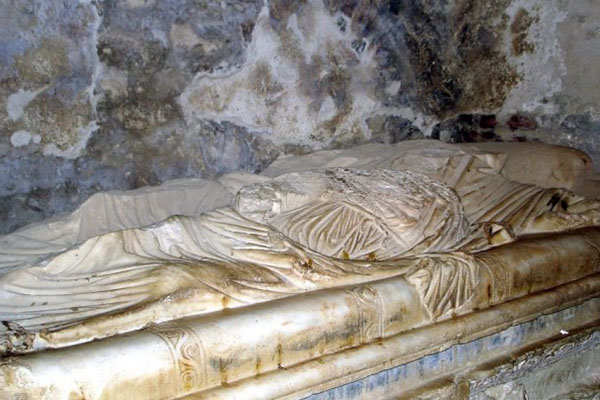 St. Nicholas, who is the patron saint of many cities, has nearly two thousand churches dedicated to him. His life and miracles are chronicled in many books, the oldest of which was written between 750-800 in Byzantion by Abbot Michael of the Stadion Monastery.

The single domed church which was there in the 4th century was expanded further in the 8th century with a cruciform chapel and with additions to the northern wing. In 1862-63, the outer narthex and parts of the inner narthex were added. A pair of stairs in the courtyard, of which today only two columns remain, descend into the southern nave which was included during the Byzantine period. On the eastern side of this cruciform section is an apse with a three arched window. 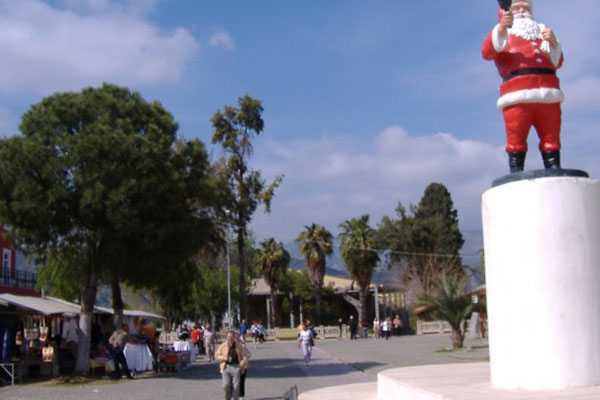 In front of the apse the original stylobate and altar can still be seen. In front of the apse niche are small and partially faded figures of saints. The fresco inside the small niche below them belongs to Saint Nicholas. In this section and in the southeastern chapel of the church proper are various mosaic patterns. Inside the niche on the west side are frescoes of Jesus, Mary, and John. From here a well preserved gate takes us to the longer section of the cruciform chapel where the tombs are located.

Although the frescoes inside the niches where the tombs are located can’t be seen clearly today they are decorated with depictions of various saints. The first niche on the northern wall and the Mary fresco above the columns are interesting examples. It is evident from the text on the second niche column where the St. Nicholas fresco is located that it was placed upside down. 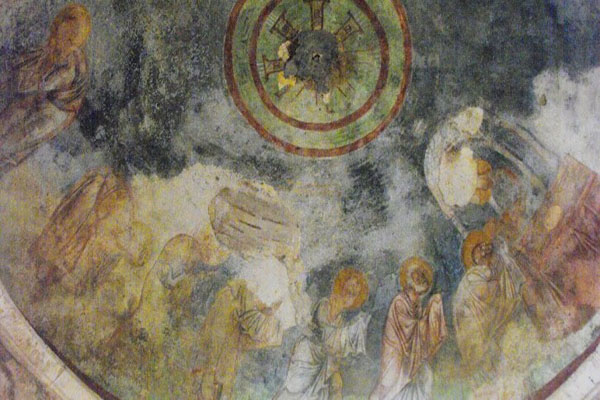 Among the tombs in the niches, it is believed that the Roman era tomb inside the first niche that’s decorated with acanthus leaves belongs to St. Nicholas. It is even said that the tomb was decorated with fish scales due to the fact that St. Nicholas is also the patron saint of sailors. On 20 April 1087, Barian pirates broke open the tomb to take the bones of St. Nicholas, bringing some back with them to Bari. The tombs inside the second niche and the ones in the niche across from them are plainer. In addition to the tombs inside the niches, there are two others located elsewhere. From here a door connects to the courtyard of the church paved with large blocks.

Inside a niche in the courtyard are two tombs that have been emptied. The cross and anchor motif on the marble block nearby must have been placed for St. Nicholas. To the left, the inscription on the tomb inside the wall contains the date “1118.” 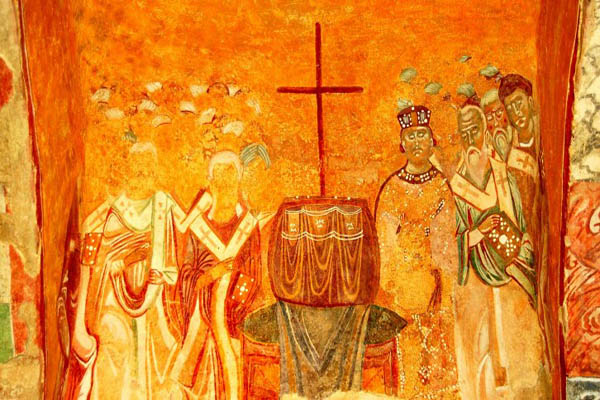 The courtyard opens first to the outer narthex, then to the inner narthex which connects to the cella (naos) through three gates. This part is decorated with frescoes depicting groups of bishops. From here the cella opens with three arches to the side naves.

To the south of the cella are two naves. Although it is said that inside the second nave is the tomb of St. Nicholas, the reliefs on the tomb of a male and female figure indicate that this isn’t the case.

On the western side of the nave that is being excavated are three rooms. Although there should be a framed and windowed dome to the centre of the room; Salzmann during his repairs has covered the top of the building using a cut stone groin vault. 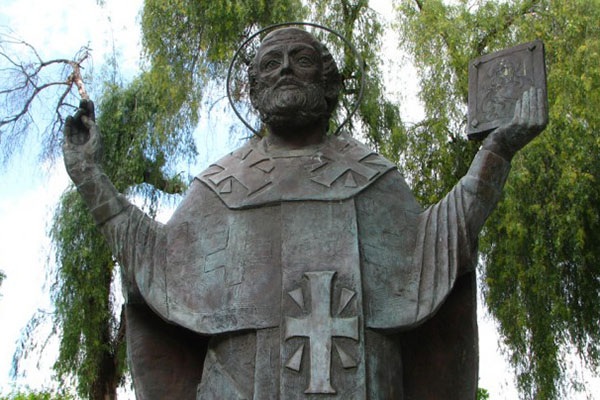